Get fresh music recommendations delivered to your inbox every Friday.
We've updated our Terms of Use. You can review the changes here.

Me And The Devil 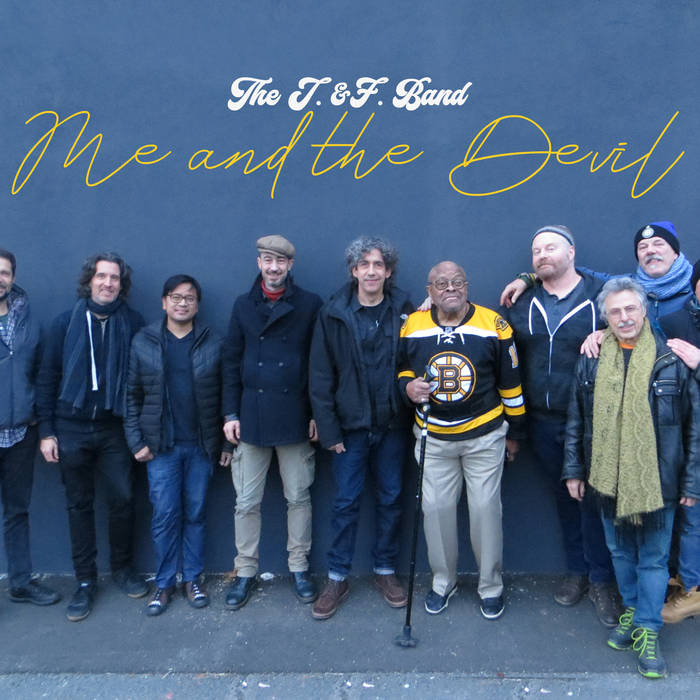 "ME AND THE DEVIL is an exhilarating effort of musicians at the height of inspiration, with the percussion sound of Jaimoe and Tiziano Tononi, the edgy guitar of David Grissom and impressive stylistic adventures. A large ensemble capable of moving in all musical directions. (funk, soul, southern-rock, rock-blues, jazz, free, avant-garde)....

...Pure magic due to the greatness of the musicians, the constant changes in mood, sound and who have created an incredibly attractive, powerful, sublime and multi-faceted lineup like the J. & F. Band. Jazz, rock and improvised music as in a torrent in flood, where the songs spring from the connection and synergy of so different but absolutely complementary musicians..

..A great record, an Italian project and production to be proud. For the record to enter your veins and ears: please Play It Very Loud!" (Aldo Pedron - Offtopic Magazine)


"..This music does beg to be heard at high volume.
Each new release adds musicians and tweaks the blues/rock/funk/jazz formula, making THE J. & F. BAND PERHAPS THE (wait for it) OUT-AND-OUT GREATEST PARTY BAND ALIVE.."
4 STARS **** , ALLABOUTJAZZ.COM

J. & F. BAND'S " ME AND THE DEVIL " IS AN EXCEPTIONAL RECORD, WHERE YOU MUST LET YOURSELF BE CARRIED AWAY BY THE FLOW OF MUSIC, ABANDONING YOURSELF TO A PLEASURE THAT IS THE SAME EXPERIENCED BY THE MUSICIANS WHO CREATED IT. A FLASH OF LIGHT BLUE IN A DARK AND SAD YEAR. APPPLAUSE.
4 STARS ****
"RECOMMENDED RECORD" STICKER
(Mauro Zambellini - Buscadero Magazine)

"..The scope and complexity of J.&F BAND's “ME AND THE DEVIL” startles the senses. These are serious players, playing seriously and with abandon at once. Fans of jazz, blues, and jam, will find so much to immerse themselves in here.." - Tom Clarke (tahoeonstage.com)

".. the sound is engaging from the first moments, and develops along steaming and torrential black music coordinates... a lava flow of funk and electric blues.... a work to which similar productions end up being pale counterfigures.... 8/10" - BLOW UP MAGAZINE

About the three J. & F. BAND records: "Three jewels made of sound, talent and energy.They are three fantastic records, three big band records, but where the guitar always manages to carve out its own creative and innovative space" - Andrea Aguzzi, Neuguitars blogspot

"Turn up the volume, start your dance: you will be rewarded by an electric rain and a choral breath capable of opening up panoramas that cross borders whose sight (the ears see, haven't you noticed it yet?) will thrill you too " - Nazim Comunale (ilgiornaledellamusica.it)

The J.&F. Band, already hailed by some as “the blues version
of the Sun Ra Arkestra”, returns with the third incredible chapter
of its musical history, “Me and The Devil” and thus closes
an ideal trilogy where it has increasingly expanded its creative
journey through many genres and styles, the result
of a passion and musical vision now without limits.

"… Atmospherical intros? Super funky grooves? Extended
improvisations mixed up with great vocal parts? Yeah! You’re in
the right place, you’re gonna find everything you need right here,
in J&F Band’s third chapter! “Me And The Devil” is the musical
melting pot in which Funk meets Blues, where the spirit of John
Gilmore from the Sun Ra Arkestra encounters the ghost of Gil
Scott-Heron... with the incredibile guitars of David Grissom (Joe Ely, John Mellencamp and many others),
Bobby Lee Rodgers (Codetalkers with Colonel Bruce Hampton) and Scott Sharrard (Gregg Allman Band, Little Feat); the super high-energy
rhythm section of Jaimoe (legendary Allman Bros drummer), Joe Fonda (jazz bass giant) and Tiziano Tononi (explosive and revered drummer);
the crazy keyboards of Pee Wee Durante (funky keys master); the tight violin /tenor sax duo section of Emanuele Parrini (the best jazz violin player on the scene. period.) and Jon Irabagon (fantastic and versatile player from NY).
It’s not for everybody: for STRONG HEARTS only!
AND - AS ALWAYS - REMEMBER TO... PLAY IT VERY LOUD!"

Long Song Records is dedicated to jazz, rock and improvised music. Founded in 2005, we mainly work with Italian and/or international artists.
The goal is involving both famous and unknown artists, pushing them towards unheard and different territories. ... more

Bandcamp Daily  your guide to the world of Bandcamp

Oakland producer Mejiwahn chats about his breezy and transportive LP.